an afternoon with Dan Alder

Can you define the word ‘yoga’?  In three words?
Patañjali can!

On November 28th, Dan Alder will be popping in for the afternoon to explain his understanding of Patañjali’s Yoga Sūtras. Dan and his mentor, Sreekanth Raghunath, have produced their own translation of this ancient and revered Indian text, and published two books on the subject.

If you’ve heard of Patañjali’s Yoga Sūtras before, chances are it was the ‘eight limbs’ that you learned about.  This is almost everybody’s starting point in yogic philosophy.  But did you know that prior to Patañjali revealing the eight limbs, there is an entire one and a half chapters (that’s 80 sūtras!) that give context, depth and purpose to the eight limbs?

Dan will expose and explain some of the sūtras which shine light on questions such as:

Each of these questions can and will be answered by referring directly to Patañjali’s Yoga Sūtras.

You’ve probably given these questions some thought already. When looking to Patañjali for the answers, we find something that is both brilliant and strange.

Copies of the Chapter One and Chapter Two hard cover books will be available for purchase at the workshop for $20 each.

Dan completed his yoga teacher training in 2010 under the tutelage of Kate Pell and Zara Matthews and took over running of The Yoga Den at West End in 2011.

In 2013 Dan assisted Kate Pell in her teacher training and continues to be a guest teacher on her courses.

In 2017 Dan ran his own teacher training course for the first time, but also moved to the country to live a more rural life on a hobby farm near Stanthorpe.  It was here that his passion for philosophy blossomed and has since devoted much of his time to “making sense” of Patañjali’s Yoga Sūtras, authoring with his mentor Sreekanth Raghunath a modern day translation of these revered texts. The first 2 chapters have now been published in hard cover books and are a useful companion for anyone wanting to learn more about yoga philosophy and live a more contented life.

You can learn more about Dan and his offerings on his website: danalderyoga.com 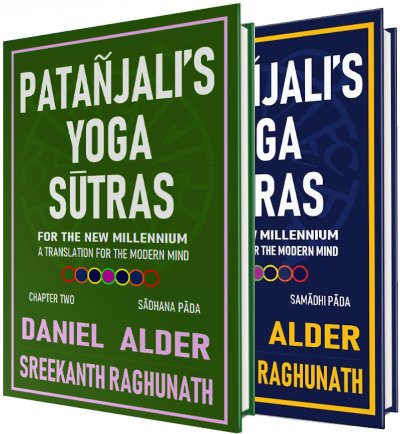