How to Let Go the Western Way – the best book I’ve read in years! 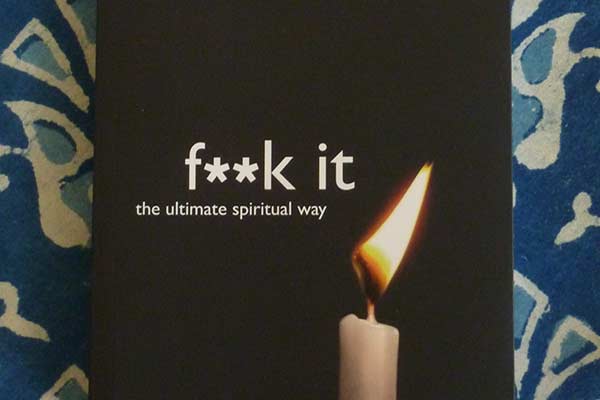 It’s been years since I’ve finished reading a book.  You see, I don’t get much time to read, and when I do it’s usually when I’m in bed at night and I can only keep my eyes open for a couple of pages before I start to nod off.  (The only other time I tend to read books is sitting at airports or on a plane).  I’m not a fast reader either, so it usually takes me months to read a book (because I don’t do enough air travel), and in the meantime, I’ve ordered another book that someone has recommended and start reading that as soon as it arrives.  Consequently I never finish a book.  Until last week, that is.

I ordered “f**k it – the ultimate spiritual way”on recommendation from Jessica Scheper who was a student on the Santosha Yoga Teacher Training I taught in Bali in 2014.  (You can check out Jess’s page on facebook – Soul Surf ‘n Yoga with Jess).   She said this book travels everywhere with her, so I thought I’d check it out.

John C. Parkin explains in his book how to “let go” using the western profanity “f**k it”!  He said “f**k it” to his corporate job in London in 2002 and moved with his wife and kids to Italy to set up a retreat centre teaching people relaxation.  He advised his retreat guests that they are probably better off saying “f**k it” to the things that are stressing them out, and from there this book was born.

From beginning to end, I found this book highly entertaining.  It is peppered with very English humour, making the material easier to digest.  Perhaps my 5 years of living in the UK made the humour more appealing to me, as I often caught myself smiling knowingly at some of the scenarios he depicted.

So what is it about?  “When we say F**k It, we stop taking things so seriously”.   The things that matter to us are the things we take seriously; the things that we get hung up about.  But when things aren’t going right that brings with it tension, both physical and mental.  So, in order to practice the Eastern spiritual idea of non-attachment and “letting go”, we can use the Western expression “f**k it”!  (Or if the F word offends you then perhaps substitute it with “stuff it”.  If the F word offends you, though, you might have trouble reading this book unless you can also learn to say “f**k it” to that!)  As soon as you say “f**k it” to something that really matters, you discover that maybe it doesn’t matter so much after all and you feel an immediate lightness in your body and mind, and a sense of freedom.  You learn to go with the flow of life and stop resisting.

Parkin covers various topics in his book, teaching us how to say “f**k it” to food, relationships, illness and disease, money, self-control and discipline, what other people think of you, plans and goals, just to name a few.  He has included some easy seated and standing positions to practise the “f**k it form” as he calls it; postures which he has adapted from his years of qi gong training in which to focus on belly breathing, allowing the chi to flow (which is something I emphasise in every class I teach).

And here’s proof that “f**k it” actually works – I said “f**k it” to some of my paperwork and household chores for a couple of weeks, so that I could find time to read this book, and I finished it in 2 weeks, near record time for me!

So, if you are someone who is self critical, stressed, uptight or anxious about anything, I’d really recommend you read this book.  If you already go with the flow of life with ease, then “f**k it”, why not read the book anyway?  You might just be entertained.

As Parkin says, “F**k It is the most profane way of saying the most profound thing: that when we relax and give in to the simple flow of life, we will experience the ultimate freedom”.